Pavel Durov claims that he spends about $ 1 million on his Telegram monthly from his own funds. It is also known that developers annually suffer losses of $ 70 million, when the capitalization of the messenger is, according to various estimates, up to $ 2.6 billion.

These numbers seem colossal compared to the fact that all functions are free. Of course, the question arises of how much Durov earns on Telegram?

Telegram: paid or not

For ordinary users, downloading the messenger from Google Play and the App Store is free. This applies to all official web clients.

However, there are certain facts indicating that Telegram is paid, but only for investors and companies using web development for their own purposes.

Officially, Pavel Durov, even when creating the messenger, announced that he was investing in the project personal money received from the sale of Vkontakte shares. Then the share of Durov in the company was 12%, and the total estimate of the value of the social network was about $ 3-4 billion. This means that for the deal he received ~ $ 400 million.

Even in this situation, the loss of Telegram by the end of 2019 (for 6 years of operation) already amounted to half a billion dollars, and this is only according to the most conservative estimates. There is reason to believe that the losses amounted to an even larger amount, and Durov physically could not cover them on his own.

This statement reinforces the company’s financial statements for the U.S. government in 2017. They indicate that investments in Telegram amounted to more than $ 850 million. 81 private investors were indicated as sources of income.

The roll-call list of persons has not been named to the public, but it is known that Roman Abramovich, a long-time friend of Durov, spoke among them. He alone invested a third of the annual budget – about $ 300 million.

Given that such large investments are attracted annually, it is not surprising that the company’s capitalization, i.e., its market value, is approaching $ 3 billion.

Due to the inexplicable financial success of the messenger, free features and the complete lack of advertising, there were many rumors about the contribution of American intelligence to Telegram. This myth is easy to dispel, because Durov publicly refused to invest in the US government. In addition, he often criticizes American IT developments.

This is especially true of the work of competitors Facebook and Whatsapp. The creator of the messenger accuses Zuckerberg and his team of collaborating with the authorities, violating the privacy of users and directly contrasts himself with this approach, guaranteeing the inviolability of state bodies to his project.

There are also widespread opinions that there are closed developer communities that pay Durov for access to the server side of the messenger. This assumption seems plausible, but so far no arguments have been found for or against.

Important! Although the messenger officially has an open API, only the client part of the code is available to users. No one knows about the server, except for the developers themselves.

The reasoning about how Telegram still makes money mostly ends up on sources of income. In fact, the question is different. Now you need to think about how the investment should pay off. Durov says that in the future, the option of the appearance of paid functions (for example, in Telegram bots, channels and chats) may be considered.

This does not sound very plausible, because it does not fit with the concept of the messenger and the ideology of the developers. Paid functions can scare away part of the audience, especially since there is as yet no effective payment system that could be convenient for users regardless of geolocation and currency used. 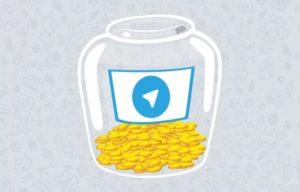 Need to look more globally. In fact, Telegram is now earning not money at all, but audience loyalty.

The idea of ​​anonymous communication without borders and privacy will be most beneficial, especially given the tendency of states around the world to control the information flow. Restriction of freedom of speech may be the worst phenomenon of future years.

For this reason, Telegram’s loss-making over time is not surprising. We can assume that the developers expect crazy success in the future, when the audience of the messenger expands, and the social network itself becomes the only placement where, unlike competitors in the form of Facebook and Whatsapp, the secret of private correspondence will be truly respected.

Then high activity will not take long, and investors who paid for entry into the controlling block of shares will receive not only huge dividends, but also influence on the global information market.

What you still need to pay for

There are no forced payments within the system, however, due to the blocking of Telegram by Roskomnadzor or to promote its own commercial projects, additional funds may be required.

According to opinion polls, more than half of users turn to free proxies and VPN services. In some countries, as well as on a number of devices, they show unstable operation. So it makes sense to buy a paid subscription.

If you are promoting the Telegram channel, then to recruit an audience you will definitely need money for “crops”, that is, advertising placements in resources with similar topics.

Reference. Payments in the messenger can only be accepted by commercial companies through third-party resources. For example, to pay for goods or services.

In 2018, Forbes called Durov a dollar billionaire. This is partly understandable, because a large share of Telegram belongs to his name. However, how much is his income without the capitalization of the messenger is difficult to answer.

According to various estimates, he has his own savings of $ 300 million. Also, Durov annually receives about $ 10 million due to income from Vkontakte.

It’s too early to say whether Telegram will be paid in the near future or not. Why? The messenger audience is 10 times smaller than its competitors, and there are no tools for introducing payments. For this reason, monetization can only come in a few years.

Music in Telegram: search, listen and download
Ways to add stickers to Telegram
Telegram bot overview
Change name and rename contact in Telegram
How to search for stickers in Telegram - step by step instructions
Add a comment
Нажмите, чтобы отменить ответ.
Comments
Categories
Related Posts:
SMS does not come from Telegram
Download music to Iphone via Telegram
Telegram Language
Adding Music to Telegram
Ways to search for a contact in Telegram by phone number
This website uses cookies to improve your experience. We'll assume you're ok with this, but you can opt-out if you wish. Cookie settingsACCEPT
Privacy & Cookies Policy